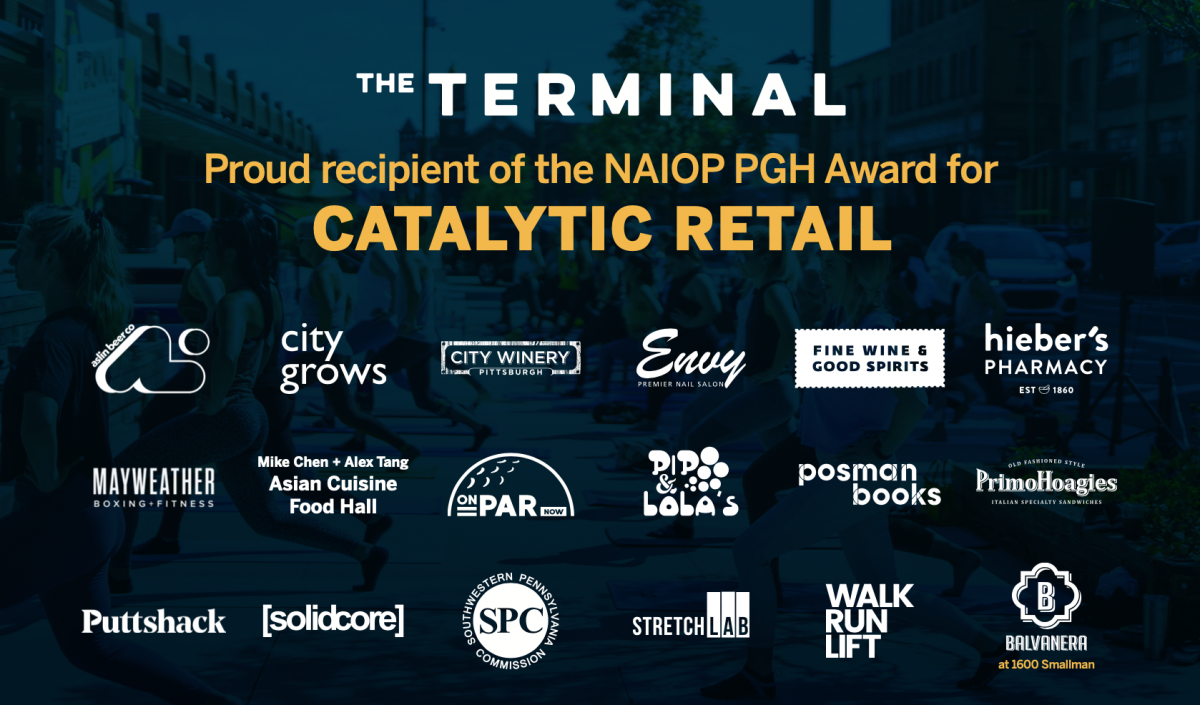 The Terminal in the Strip District was awarded the 2022 Catalytic Retail Award from the NAIOP Pittsburgh chapter at the 29th annual awards banquet held on May 19, 2022. Chosen for meeting various criteria, including Innovation in Development and Economic Feasibility, the McCaffery Pittsburgh Management Team was proud to accept the award at the event.

NAIOP Pittsburgh is the regional association of developers, owners, investors and professionals of commercial real estate. The organization serves as a leading industry resource to foster business relationships, promote responsible development and support growth of the region through education, leadership and advocacy.

About the Catalytic Retail Award

As of February 2022, 69% of announced and to-be-announced leases have been signed by local and regional brands, operators and franchisors, including Lawrenceville-born City Grows, Upper St. Clair’s Envy Premier Nail Spa, Oakland-based Hieber’s Pharmacy, and Pip & Lola’s Soaps and Sundries from Homestead. Additionally, currently 50% of all signed retail leases qualify as a Women or Minority Business Enterprise (WBE/MBE).

The impact of these retail “firsts” has been felt well beyond the five blocks of the Terminal. As noted in the Strip District Neighbors State of the Strip District 2021, “the Strip welcomed 11 new restaurants and retailers in 2020 and through Q1 2021. Five new tenants were announced for McCaffery’s Strip District Terminal redevelopment, including City Grows, Fine Wine & Good Spirits, Envy Premier Nail Spa, Walk at Home, and OnPar Now, a locally owned golf instruction business.” Additionally, McCaffery is placing a Balvanera, a NYC-based, first-to-region restaurant concept in the ground level of neighboring 1600 Smallman, just below the 100,000 SF Aurora Innovation regional headquarters, also leased and managed by McCaffery.

Furthermore, retail and restaurant growth in the area has “attracted some of the most innovative tech companies in the country. Honeywell Robotics, Facebook’s Artificial Intelligence Team, Aurora Innovation (which purchased Uber’s self-driving car division), Argo AI, Bombardier, Smith + Nephew, and dozens of other tech companies all call the Strip District home.”

Driven in part by the redevelopment of The Terminal, growth of job opportunities and the rise in available service, entertainment and dining options has also increased residential development. The neighborhood has seen a 150% increase in residents since 2015 and the addition of 1,425 residential units with 1,258 more residential units in the pipeline, according to the annual report.